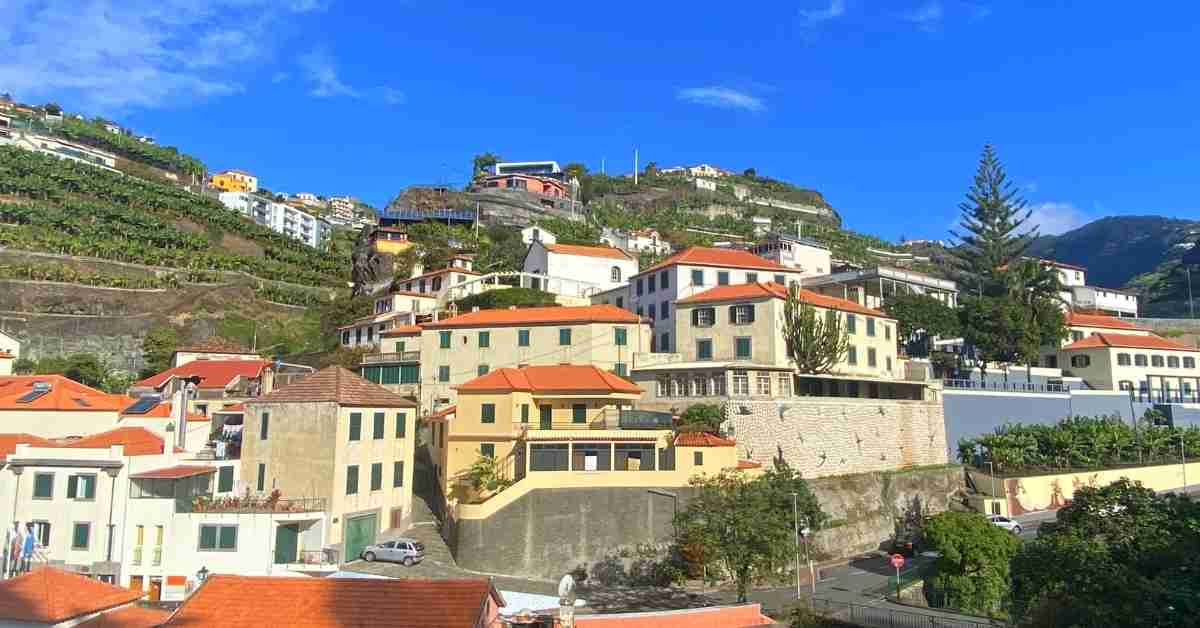 Living in Madeira for the long-term is high on my list of 2021 goals.

Funchal, the Madeiran capital, was the perfect place to wait out the worst effects of the 2020 pandemic and the resulting lockdowns. I believe that Madeira has excellent long-term potential as a digital émigré destination.

Before I arrived in Madeira, I had no idea to what to expect. After just a few months, I’d already decided to make it my primary base while I work towards getting Portuguese citizenship.

So you’re probably wondering, what makes living in Madeira so compelling?

I’m here to tell you exactly why Madeira is one of the best choices for your EU citizenship mission.

Benefits of living in Madeira

Let’s take a look at some of the great things Madeira has to offer.

2020 became the year I opted out of winter. Amidst a pandemic, with lockdowns in place all over Europe, I was grateful for the opportunity to escape. Because Madeira is so far south (600 km off the Moroccan coast on the same latitude as Marrakesh), it has warm weather and a temperate climate all year round.

Some parts of the island are cooler than others (we saw snow a few times on the tallest mountain tops), but top destinations Funchal and Ponta do Sol are usually warm. For example, I was on the beach on New Year’s Day 2021, in water warm enough for swimming.

Living in Madeira has certain advantages for avoiding the worst effects of the pandemic. As an island far out in the Atlantic, it’s easy for Madeira to control its borders. The main island only has one airport and there’s no other way of getting in.

Plus, Madeira is an autonomous region of Portugal, so it can set different rules to those on the mainland. This was evident during the Covid winter of 2020 and early 2021. Madeira had an evening curfew, but normal life continued during the daytime.

In contrast, mainland Portugal went into full lockdown, closing all restaurants, bars, and gyms. The government of Madeira also implemented free Covid testing at the airport for all arrivals. Madeira experienced a few worrying weeks where numbers spiked, but in general the situation remained under control throughout. With such pleasant weather, it was easy to socialise in the open air where the virus was less of an issue.

I was pleasantly surprised at the low cost of living in Madeira, especially in terms of accommodation. The capital Funchal, is the priciest, as you’d expect. But nowhere do prices reach the astronomical levels of Lisbon.

For example, you’d expect to pay at least €1000 per month for a T1 (one-bedroom) apartment in the centre of Lisbon.  In Funchal, I easily found an apartment, on a short-term basis too, for almost half that figure. Even in normal non-covid times, it’s easy to find a T1 rental for €500 or €600 per month.

Eating out is also very affordable, especially if you stick to non-touristic places. Many of the more touristy/international restaurants are also quite well-priced. My favourites in Funchal are Prima Caju, the Ritz Cafe, MadCuba and Principal Bistro.

If you’re a fan of specialty coffee, you’ll find beans from Madeira’s only roaster (Greenhouse Coffee) served at Land Food & Coffee. But you’ll have to work hard for it, as the cafe is up a very steep hill. Or you can take the cable car up the mountain. Land Food & Coffee is situated just underneath the end point of the cable car.

Nature is never very far away on Madeira. The interior of the island is covered in greenery, including thousands of banana plants. It even has some unusual species, like the pineapple-banana fruit, and other strange-looking plants whose names I don’t know. Striking vistas are never far away, especially from the tops of cliffs and high-level hiking paths.

From the heart of Funchal, you can walk along the ocean front and spend time gazing out over the Atlantic and feeling the ocean breeze. If you want a more rural experience, the island of Porto Santo is 2.5 hours away by ferry. Here, the population is around 6,000, including a small remote worker community. There’s a large golden sandy beach and plenty of good hiking.

Madeira is extremely safe, with very low rates of all types of crime, including pickpocketing, burglary and violent crime. I felt 100% safe walking on the streets of Funchal at all hours of the day and night (granted, I have a fairly high tolerance for this, having lived in London, New York, Mexico City, Brussels and Istanbul). I noticed a few people living on the street, potentially drug addicts, but none of them seemed threatening whatsoever.

Madeira is also very accepting of LGBTQ.  Restaurants and most service places are not discriminatory but nor are they hanging rainbow flags left and right. It’s just a relaxed acceptance. Several of my LGBTQ friends say they feel comfortable holding hands with their partner in public.

Community is vital when you move to a new place. I was impressed with what I found in Madeira. Because of the island’s tourist focus, many locals speak excellent English. There’s also compulsory English education from primary school level upwards, which (as far as I know) isn’t the case on the mainland. It’s an easy place to make friends and people are open to interacting with newcomers.

Because it’s a small island, you’ll often bump into people you know, even when just having coffee at a street cafe in Funchal. It’s a nice contrast to big city life, which tends towards the fast and impersonal. In fact, my social life in Funchal has been far more active than it ever was in Lisbon. It soon reached the point where all the socialising was distracting me from doing my actual work!

That sense of community extends into the remote worker population. Initiatives such as Startup Madeira’s Digital Nomad Village have done a lot to promote cohesion between newcomers to the island and help people get acquainted. I arrived in late November 2020 and was immediately added to a lively WhatsApp group and Slack channel.

Both groups are full of remote workers from all over the world, based in Madeira. Many had originally planned short visits, but a lot ended up staying for the long term, just like I did. Madeira has that effect. I instantly felt part of the community and have made a number of lasting friendships.

The Digital Nomad Village has helped put Madeira on the map. It’s generated a lot of PR and buzz around the island. We can expect to see that trend carrying on into the rest of 2021, as people start to emerge from the pandemic and seek out new destinations to establish their lives.

In 2021, Madeira will see its fair share of transitory digital nomads, as well as digital émigrés who are there for the long haul. Here’s the final icing on the remote worker cake – Madeira has the fastest Internet in Portugal.

For the property investor, Madeira offers several compelling advantages. The real estate market has (so far) escaped the bubble that’s descended upon Lisbon, and, to a lesser extent, Porto and the Algarve. You can still find affordable property all over the island. Funchal is the most expensive destination, but with the biggest rental and resale potential.

In outlying areas of Funchal, such as Praia Formosa, you can find beachside apartments with amazing ocean views. Residential areas such as São Pedro or Madalena are good value, while still keeping you within easy walking distance of central Funchal. Watch out for the hills though, they’re a killer!

But on Madeira, nothing is very far away (unless it’s up a steep hill). Surrounding towns like Santa Cruz, Caniço or Machico offer good value within around a 20 minute drive from Funchal.

The village of Ponta do Sol (home of the famous Digital Nomad Village) is only 30 minutes drive from Funchal. Ponta do Sol is the sunniest place on the island. It also has excellent potential for buying and renovating properties. I haven’t explored the north side of the island yet, but I’ve heard it has even more affordable properties.

What’s more, upcoming changes to Portugal’s Golden Visa program are likely to favour Madeira. From January 1, 2022, Portugal will remove Lisbon and Porto (and possibly the Algarve) from the Golden Visa list. That means potential investors will have to look elsewhere for properties. They’ll be restricted to central Portugal, the Azores and Madeira.

While central Portugal definitely has some stunning towns, the weather is likely to be colder. In some locations the international community may be limited (although that makes a great environment for learning Portuguese). As for the Azores, they’re less developed than Madeira and further out (over two hours by air from Lisbon).

That leaves Madeira as the most compelling choice. When Golden Visa investors descend on a region, they tend to push up property prices. This creates a strong incentive for ordinary investors to buy in Madeira before the end of 2021. That’s certainly what I’ll be doing.

For those who wish to incorporate a company in Portugal, Madeira offers some interesting advantages over the mainland. The Madeira International Business Centre is an initiative created in the late 80s, to rejuvenate the island’s economy by attracting foreign investment.

The company also needs to have a director resident in Madeira (but they don’t need to be a Portuguese national). The €75,000 investment can include a property for the director to live in. You should speak to a qualified accountant before making any decisions involving tax. We highly recommend making an appointment with Nuno Coelho at MAD.INTAX.

10. Less bureaucracy than the mainland

New arrivals in Portugal often complain about difficulties with bureaucracy. I’ve had my share of struggles with this. For example, in November in Lisbon, I sent my UK driving licence in for exchange. February arrived and still no word. I called the IMT office in Lisbon.

They informed me that the system ‘had changed’, so I needed to resubmit everything. Finally, I decided to try doing the exchange in person at Madeira’s version of the IMT office. Everything was done within 20 minutes, photos and biometrics included.

All bureaucracy can be unpredictable and I’m not saying that Madeira has a perfect system compared to the mainland. But, in my experience, things tend to be easier in smaller places with fewer foreigners. This theory could also extend to citizenship applications.

In fact, the immigration lawyer who supports Digital Émigré has advised me to submit my application in Madeira, rather than Lisbon. She’s confident that the process will be faster and smoother than in Lisbon.

Conclusion: Is living in Madeira a good idea?

I’m already very bullish on Portugal. Objectively speaking, it’s the best country in the EU for getting citizenship. And Madeira is simply the icing on the cake. It offers all the benefits of Portugal for those who want to eventually become citizens, plus all the things I’ve talked about in this article. If this has got you interested in the idea of living in Madeira, I recommend that you visit as soon as travel opens up again.

To talk to our team about getting the right visa for your move to Madeira, please get in touch.

What do you think of the idea of living in Madeira? Does it appeal, or do you still prefer mainland Portugal?

Let us know in the comments!

6 thoughts on “Living in Madeira in 2021: Portugal’s most exciting hidden gem”

Citizenship of Malta for remote workers: Everything you need to know

EU permanent residency vs citizenship: How are they different?

How to get Portuguese citizenship (and why it’s the best in the EU!)

How to get Spanish citizenship (and should you do it?)

How to Learn a New Language in 2021 (For EU Citizenship)